Parent Alert! You can loose your freedoms in schools 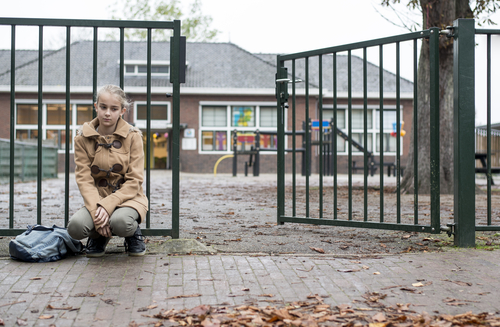 You are a divorced parent with a 15-year old son. He wants to live with his father to try a better school. You let him.

Next thing you know, your 15-year old son wants to live at a friend’s house for a while and his father allows him to do this. You have no idea the amount of time spent at this “friend’s” house.

A few months go by and you find, unbeknownst to you, that your son is living at this “friend’s” house, and with help from this family and some homosexual “advocacy groups”, your son has filed for “emancipation” without your knowledge. Next, they tell your son’s school that you knew about it and relinquished your parental rights. Your son, with the help from this “LGBT advocacy group”, filed a claim with false information and never alerted YOU as the mother.

Now the school has informed you that they have been secretly giving your minor son (without informed consent from you) “female hormones” in an effort of helping him transition into a woman. Your 15-year old child was given these hormones at school to help him in his transgender process without obtaining any legal consent, without a completed emancipation, without a legal name change, with no termination of parental rights. Nothing.

And just when you thought it could not get worse…

The school, along with this “advocacy group” and others, is helping your son plan on his final transgender “transition” surgical operation. Your baby boy. Your child. Your son.

You file a lawsuit and the judge rules in his and the LGBT groups FAVOR completely ignoring the Constitution’s Parental Rights Amendment that states, “The liberty of parents to direct the upbringing, education, and care of their children is a fundamental right. The parental right to direct education includes the right to choose, as an alternative to public education, private, religious, or home schools, and the right to make reasonable choices within public schools for one’s child. Neither the United States nor any State shall infringe these rights without demonstrating that its governmental interest as applied to the person is of the highest order and not otherwise served.”

A nightmare? This could never happen? Well it happened and it happened here in the United States of America to a mom by the name of Anmarie Calgaro, whose son is now a “female” and who although filed a lawsuit to stop the transition, to get compensated by the school, and to find justice as a parent, was denied by a judge in St. Paul Minnesota. The judge in essence said that because the school didn’t really know that what they were doing was illegal, which it was, that they really, “are not liable or responsible for helping this 15-year old boy transition into a female.”

“Because of the assumption of emancipation, the school refused to give Calgaro her son’s medical or educational records, and the Department of Human Services refused to give Calgaro information about his “transition” treatments, including a “life-changing operation,” according to the Thomas Moore Society (TMS). ” The judge went so far in downplaying parental rights as to rule that a parent’s access to their child’s medical and education records is a question to be solved. “

WHAT?!?!? A question to be solved? Mr. Judge, with all due respect (but not really) I think the Constitution and God solved that “dilemma” years ago. And I am appalled at your behavior. To further their agenda, several LGBT groups have lashed out at the mother claiming that her constant referral of her son as a “he” is damaging, abusive, and outright criminal and clearly shows her “anti-trans prejudice.” David Edwards of the transgender group Transforming Families states, “Purposefully mis-gendering a transgender person is an act of violence.” What about illegal acts and psychological manipulation of a minor Mr. Edwards? Sounds like child abuse to me.

All I can say as the anger pools in my heart and makes its way up to my brain is that we are living amongst a sick, twisted, godless generation of fools. Romans 1:21-32 could not be more clear as to what we are seeing and experiencing: “because, although they knew God, they did not glorify Him as God, nor were thankful, but became futile in their thoughts, and their foolish hearts were darkened.  Professing to be wise, they became fools, and changed the glory of the incorruptible God into an image made like corruptible man—and birds and four-footed animals and creeping things. Therefore God also gave them up to uncleanness, in the lusts of their hearts, to dishonor their bodies among themselves, who exchanged the truth of God for the lie, and worshiped and served the creature rather than the Creator, who is blessed forever. Amen.  For this reason God gave them up to vile passions. For even their women exchanged the natural use for what is against nature. Likewise also the men, leaving the natural use of the woman, burned in their lust for one another, men with men committing what is shameful, and receiving in themselves the penalty of their error which was due. And even as they did not like to retain God in their knowledge, God gave them over to a debased mind, to do those things which are not fitting; being filled with all unrighteousness, sexual immorality, wickedness, covetousness, maliciousness; full of envy, murder, strife, deceit, evil-mindedness; they are whisperers,  backbiters, haters of God, violent, proud, boasters, inventors of evil things, disobedient to parents, undiscerning, untrustworthy, unloving, unforgiving, unmerciful; who, knowing the righteous judgment of God, that those who practice such things are deserving of death, not only do the same but also approve of those who practice them.”

Godly morality and Biblical principles aside, this is in direct violation of the rights of parents and void of common sense for that matter. This is child abuse. This is a gross overreach and an act of injustice by the school, the government and of course this Judge. Allow me to clarify: a private cake making business cannot choose to support traditional marriage and not immoral gay “marriage” by refusing to BAKE A CAKE, but a mother’s rights to her child can be stripped to the point where the SCHOOL can decide to forever alter her son’s sexual identity without her approval or even her knowledge?!?

Ladies and gentlemen (and there are only TWO genders) what planet are we living on?

I will however call this depravity. I will call this an attack on our children. I will stand up for my children and speak out. I will make sure I know what they are learning every day in school. For me, I will make sure our children never see the inside of a public school ever in their lives. I will pray for and with my children. I will talk to them about these issues so they know how to arm themselves. I will help other parents know truth. I will be an advocate of all things moral for all children in this country. I will pray for the lost and encourage my children to do the same and love yet speak truth and not tolerate sin.

I write these things not to discourage you as parents, but to inform you as mothers and fathers of the next generation. The enemy is after your children and he is winning over more and more souls every single day. We do have hope. (Jeremiah 29:11). Hope in a greater Force. Hope in a Mighty God and Heavenly Father.

Pray for your children. Talk with them. Pray for those around you who believe the lies of the enemy. In love speak truth. Trust but verify.