Profile of a Mass Shooter: Part 2 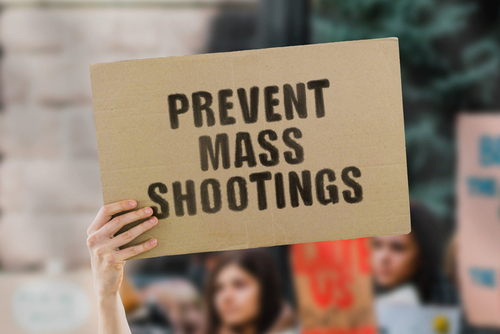 Are Psychiatrists Prescribing the Smoking Gun That Fuels The Fire?

This Florida mass shooting incident by yet another “troubled teen”, namely Nick Cruz, has awakened the investigative reporter and behavior analyst in me. In the last week I have contacted more politicians than I have in the 10 years or so I have been politically active. Saturday night I was able to meet with Senator Ted Cruz at an event where Vice President Mike Pence addressed the audience on subjects including mental health, school safety and mass shootings and the changes we need. I have finally been taken seriously as news and radio outlets have begun to pick up my story and are covering this important topic, but we need more people to take notice.

I have solid solutions that will put the focus on the real issue at hand and I will emphatically say this again to the likes of Joy Behar, Nancy Pelosi, Whoopie Goldberg, George Clooney and Oprah Winfrey, “THIS IS NOT ABOUT GUN CONTROL”, and it is not even 100% about mental health.

Parents have checked out.

Teens are taking their lives or entering into psychotic rampages and taking the lives of innocent victims.

Then the cycle continues…

Take a look at some hard facts (and a small sample of my research) that have been checked and cross checked and let me show you some sobering statistics (taken from “The Spiral Notebook…” Singular, 238) and then I will show you how and why this all can be prevented:

And this is only the tip of the proverbial psychotropic iceberg.

I have a list of hundreds to thousands of more teens who were prescribed psychotropic drugs for either health issues or situational emotional issues with similar detrimental effects as those mentioned in the above list. I have worked with several teens over the last 27 years that either attempted to take their own life or that of someone else, or revealed to me their plan to do great and mass harm to others. I then contact law enforcement, the parents and where that information goes, sometimes I never know, but I follow it through as far as I am professionally able to make sure no harm is done.

This is where we are missing the communication piece that can and will prevent these mass shooting tragedies. This information never gets to the right agencies and in front of the right people and there is nothing I am able to do as a mental health professional to see some of these cases through.

For me, enough is enough. I can no longer stand by and watch this happen when I have the solutions now written out in an easy to read proposal for any politician who is ready to make a change once and for all.

The government themselves issue their most serious warning of “increased risks of suicidal thinking and behavior, known as suicidality, in young adults ages 18 to 24 on the SSRI’s most of these perpetrators are taking, yet we continue to set to set them up by prescribing them like candy.

Parents, Senators, Congressman, Governors, Mr. President, are you listening yet?

Looking further into what these teens mentioned above have in common we see:

All of the above is preventable. But we as a “village” have stopped caring to a point. We have replaced our time spent with our youth with phone screens and Facebook.

We have all but ceased disciplining our children in love and instead pacify them with an electronic device or a pill so that we can get on with what we want to do.

Schools ignore the behavior because they don’t want to, nor are they qualified to deal with the discipline issues. Can I blame them? Not really. But it certainly isn’t going to go well for any of our children if it continues.

And then we act surprised when these teens all of a sudden start displaying grotesque, unconventional ways of “coping” with what has been bottled up for weeks, months or years.

But I somewhat digress—I will explain more on what we can do as a society and what exactly went wrong with Florida shooter Nikolas Cruz in the final part of this three part series. For now let’s focus on the mental health aspect of this all and real solutions.

I am a huge advocate for teens and any individual either on an SSRI or considering it, to be tested for the COMT gene variant. If an individual has this variant and is experiencing the following side-affects which magnified 100 fold, please seek help immediately:

If anyone reading this has had an adverse reaction to any of the following FDA approved SSRI’s, contact your doctor immediately and demand lab work that tests for the COMT gene variant.

The SSRI’s in question include:

I am not saying that this will happen to everyone on an SSRI. They can be beneficial for many. The point I am trying to get across is that the vast majority of the mass shooters we see across this country had commonalities that include the use of SSRI’s, symptoms that were not addressed sufficiently and abnormal behavior that ended up causing mass casualties. The latest research which covers over 34 studies, even shows that SSRI’s are not effective on children and teens as once thought (www.statnews.com/2016/06/08/antidepressants-teens-kids/).

In most cases, the side effects are worse than the initial complaints by the patients and there was little to no difference than the drug itself. Therefore, in my opinion, most of these incidences could have been avoided. Teens need us. They need to be understood. They need our time. Not a desensitizing hand held device and certainly not a pill.

So again, the question I ask myself quite a bit lately: Now what?

Parents: If you notice a negative change in your child after giving them an SSRI, let their doctor know.

Mental health professionals: LISTEN to your patients and screen them for the COMT gene and require that at risk teens and their parents receive Cognitive Behavioral Therapy (CBT) from a licensed professional.

Teachers: Refer students if you see dramatic behavioral changes in your students, ASAP.

Law Enforcement/First Responders: Make sure if at risk teens or young adults are taken to the ER for homicidal or suicidal ideation that they are tested for the COMT gene variant and ask if they have been recently prescribed an SSRI.

Probation Officers, Judges, Potential Jury Members and Lawyers: When working with teens and young adults especially that involve clients on SSRI’s, make sure to require a full tox screen and panel along with a COMT gene variant test.

Politicians: We must create a plan of action ASAP and policy that allows the above groups of people and agencies to communicate with one another. It is that simple. Let me help.

These mass shootings and other criminal activity can be prevented and our teens can be better understood if we work together to be a part of the solution.

We must listen better to our teens and tweens.

We must research the medications we too easily prescribe and willingly hand over to our children as an easy discipline or behavioral “fix”..

We must hold our politicians accountable on both sides and make them listen to those of us who have real solutions and a desire to write policy that will enact change. The research is out there and so are the solutions to this increasing epidemic of homicidal and suicidal teen behavior. It is preventable and I for one will not stop writing and speaking about and researching this issue that has once again reared its ugly head, this time at a school in Florida.

I can confidently say that every single one of the teens involved in these mass shootings could have been treated successfully with psychotherapy, coping mechanisms, parental involvement, the RIGHT medication and a solid support system. I work every day with my teen patients and I have worked with potential mass shooters that have revealed their plan to me. The difference is, my preventative plan of action works to stop the intended destructive behavior and I am desperately trying to get it out to the policy makers and politicians so we can enact real change in America.

I became a mental health professional because I want to enact change. I believe in solutions to issues of the mind or I wouldn’t be working in this field.

This is not about gun control.

This is not about untreated mental illness.

This is about America opening their eyes to the real issues.

It is about us all taking responsibility for what messages we send our teens and youth.

It is about what we post on social media, how we treat others and about walking our talk.

It is about parents taking back the disciplinary reigns for our children and giving a damn.

And finally, it is about what we as a community of parents, teachers, first responders, legal advocates, politicians and mental health professionals are proactively doing to make sure this never happens to another student in any of our schools again.

Are you up for the challenge? Then please help me get this information out to the right people so I can be a part of the solution alongside you–the great people and patriots of this Nation under God.